Can more Debt solve a debt crisis....I doubt it somehow..

The head of the European Union and Czech prime minister Mirek Topolanek has publicly said that the plan to spend nearly $2 trillion to push the U.S. economy out of recession is "road to hell". There is no reason to castigate Mr. Topolanek for his characterization of the Obama plan. True, it would have been more polite and diplomatic if he had couched his comments in words to the effect that "the Obama plan was made in blissful ignorance of the marginal productivity of debt which was now negative and falling further. In consequence more spending on stimulus packages would only stimulate deflation and economic contraction."

President Obama, like president Nixon before him, missed an historic opportunity in not ordering a complete change of guards at the Treasury and at the Fed. Now the same gentlemen who have landed the country and the world in this unprecedented débâcle are in charge of the rescue effort. The QTM, the corner stone of Milton Friedman's monetarism, is the wrong prognosticating tool. The marginal productivity of debt is superior as it focuses on deflation rather than inflation.

The financial and economic collapse of the past two years must be seen as part of the progressive disintegration of Western civilization that started with the sabotaging of the gold standard by governments exactly one hundred years ago when in France and in Germany paper money was made legal tender. The measure was introduced in preparation to the coming war, so that the government could stop paying the military and the civil service in gold coins, starting in 1909.

Some commentary on this article my supkis.. 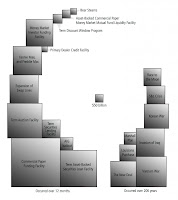