Oil's going straight back up to new highs 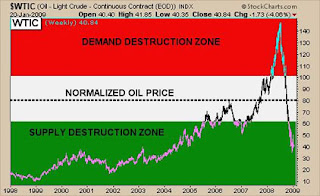 There are 70,000 oilfields in production worldwide; however, the bulk of our production comes from 20 super-giant oilfields, which account for over 25% of daily world production. Of even more concern, the vast majority of these fields were discovered 50–70 years ago.

In addition to the dearth of new discoveries, depletion rates are rising as old fields mature and decline. Remember, newer discoveries over the last two decades have been fewer and smaller, and many of them have been offshore. Smaller oilfields and offshore oilfields deplete at much faster rates than some of the "old giants."