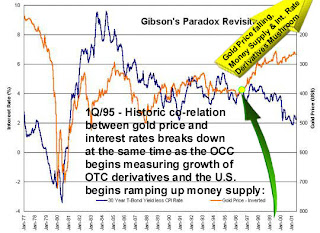 After a stint as Chief Economist at the World Bank, Mr. Summers brought this “theory” to Washington mid-way through the first Clinton Administration [late1993] as Under Secretary of Treasury to Robert Rubin where he began laying the groundwork – with co-conspirators Greenspan, Rubin and Clinton - for the implementation of his “theoretical research”:

Gold price suppression began in earnest concurrently with changes in how the Office of the Comptroller of the Currency [OCC] records the mushrooming growth of derivatives [mostly interest rate swaps which – absent end user demand – only create artificial demand for government bonds]: