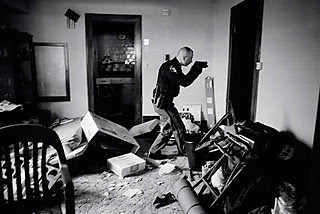 A U.S. photographer won the top prize in the World Press Photo competition Friday with an image of a police officer searching a debris-strewn home in Cleveland, Ohio to ensure evicted residents had left after a mortgage foreclosure.

Anthony Suau's winning photo for Time magazine shows the officer, handgun drawn, peering into an open doorway inside the house, which is filled with overturned furniture and boxes.

The image, shot on March 26, illustrates the economic crisis that began with the U.S. housing market and spread around the globe.

"The strength of the picture is in its opposites. It's a double entendre," said jury chairwoman MaryAnne Golon. "Now war in its classic sense is coming into people's houses because they can't pay their mortgages."