Signposts Towards The Inevitable

While many people (thanks to the MSM) place the blame for the source of our current economic woes on the Sub-Prime mortgage problem, this was but one symptom that first manifested from the fundamental American Govt. disease of abusive largesse of its world reserve currency. However, with this flawed former line of reasoning, the same people come to the erroneous conclusion that solving the housing crisis will solve the whole problem. This is only partly true. Whilst underpinning the deteriorating housing situation would be a great first step forward in this mess, the FED seems more intent on bailing out the investment banks which were complicit in willfully slicing, dicing and packaging all the highly complex and highly suspect derived debt instruments in the first place.

Yet the Sub-Prime problem pales in comparison to the next wave of loan resets and associated defaults that is about to hit. With the bulk of the Sub-Prime ARM resets out of the way, we have another wave of Alt-A and Option ARM resets to undergo. This will be an additional blow on top of all the other financial fallout that is currently hitting the fan.

The graph below shows an extended Wave 2 due to hit an already stressed and systemically weakened financial shoreline in April/May09. 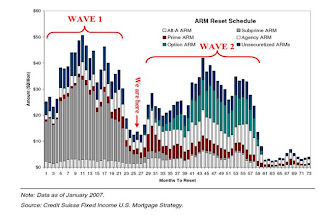 If we are to believe certain analysts, this second wave (affecting $2 trillion worth of mortgages) is twice as large as the first in terms of dollars lent although to me the areas under each wave look comparable. Larger or similar in size, it matters not. With an already cash-strapped US home owner and an already battered US economy, the ensuing fallout may be multiples of the Sub-Prime defaults. We are already seeing huge declines in home real estate prices especially in the hotter areas. Bob Chapman estimates average house price declines could reach 35% from their Jun05 highs while hotter areas could fall by 60%.

Growing consensus expects the commercial real estate market to be the next property class to go pear-shaped, as retail outlets and financial firms go bust. New York real estate was already down 61% in Nov08 by Gerald Celente’s reckoning. We can expect these figures to be periodically revised downwards as the full extent of the wash-out becomes apparent. My gut feeling is an average decline figure around 80% from the high as we will not simply be returning to sensible pre-binge norms but diving deeper below them. The following is from the Wall Street Journal:

“In the typical severe financial crisis, the real (inflation-adjusted) price of housing tends to decline 36%, with the duration of peak to trough lasting five to six years. Given that U.S. housing prices peaked at the end of 2005, this means that the bottom won't come before the end of 2010, with real housing prices falling perhaps another 8%-10% from current levels.
Perhaps the most stunning message from crisis history is the simply staggering rise in government debt most countries experience. Central government debt tends to rise over 85% in real terms during the first three years after a banking crisis. This would mean another $8 trillion or $9 trillion in the case of the U.S.
Interestingly, the main reason why debt explodes is not the much ballyhooed cost of bailing out the financial system, painful as that may be. Instead, the real culprit is the inevitable collapse of tax revenues that comes as countries sink into deep and prolonged recession.” (What Other Financial Crises Tell Us)
My point being that this is not your typical severe financial crisis. So even if President Obama does suddenly find religion and decide to bailout real estate owners rather than giving TARP (tax payer’s) money to the investment banks, or into infrastructure spending, we can expect another wave of foreclosures coming to a shoreline near you to scuttle any hope of a quick recovery that many fairy-tale MSM analysts proffer. This second wave will not only hit consumers where it hurts but also put the final nail into the coffin of an already beleaguered US construction industry. With consumerism and home-related service industries having made up such a large proportion of past US GDP, it is not hard to read where this signpost leads.
Posted by kevin at 2/15/2009 09:02:00 am