Woo Hoo ~ Australia is the number one disaster 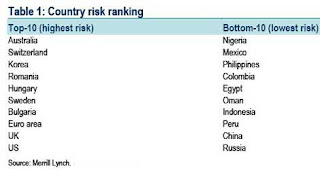 (Damn SMH and Merrill and Mr west catch my drift)

Merrill Lynch put out a global economic report last week in which it dubbed Australia the riskiest economy in the world. Counter-intuitive as it seemed, Nigeria was rated the safest.

The blogosphere went wild: "ridiculous'', "nutty, "what a joke'', said some. A few broadly agreed with the findings.

Titled "Everything you wanted to know about the world'' the Merrill economics team drew on 62 indicators from the 60 countries.

As this country has zero national debt, a stable government and an apparently well-capitalised banking system we can take the Merrill report lightly. In any case, the nature of these things is a complete stab in the dark.

As one blogger put it: "Nigeria is clearly the least risky country in the world. Many Nigerians email me that they have $7.2 million that they wish to share with me on a 50/50 basis. They must be rolling in money!''

Still, it's worth looking at why Australia is at risk. The current account is coming home to roost and the economy is vulnerable to a flight of capital - not from institutional funds into banks but from foreign investors straight out of the country.

Though the Reserve Bank has taken the long-handle to the cash rate with aplomb, the boffins at the bank's headquarters in Martin Place will be quietly panicking.

We are now more susceptible than ever to our large private foreign debt. It is becoming expensive to service, even expensive for the banks to roll in the short term as the $A has fallen.

Offshore investors venture Down Under for two key reasons: to play in commodities and to enjoy the high yields. Commodities prices are getting smashed along with the unequivocally horrible economic and corporate data coming out of the US and Europe.

And as rates fall the attraction of Australia as a stable place to park some money is also diminished.

But there's a more pressing issue - the flip-side of the boom if you like - and that is the penalty for relying on overseas debt.

Despite a relieving thaw in interbank markets offshore, the RBA is not done with its liquidity campaign by a long-shot. And there may yet have to be draconian measures adopted to defend the $A.

To take an example of the banks' painful reliance on foreign credit, short-term money borrowed at 98c when the $A peaked earlier this year would now have to be refinanced at 65c.

That is expensive, and don't be fooled that it's all hedged. Even if it were, who might the counterparty be? Somebody must carry the risk.

According to the ABS (Australian Bureau of Statistics), which gets it numbers from APRA (Australian Prudential Regulatory Authority), Australian cash assets of $317 billion were held in US dollars as at June 2008. This is the money which Australian banks and financial institutions have invested overseas.

At that date our overseas exposures by value were in the following markets (the figures are rounded):

US: $40 billion (some of which may be impaired)

There's $170 billion to be going on with, or 53% of the $317 billion held offshore. You could reasonably assume a similar level of impairment on the other national currency exposures (47%), although there would not be much in the Icelandic market.

Where are our banks going to get their liquidity if the UK has frozen its market and the US is so impaired? The Reserve Bank of Australia has certainly been helpful, injecting north of $50 billion in cash so far.

About $700 billion of the $1.88 trillion in borrowings - $700 billion is a guesstimate based on numbers in ABS National Accounts June 2008 being $250 billion lower (on account of additional credit growth) than the RBA's August 2008 numbers (were the $1.88 trillion comes from) - is on short-term debt markets turning over at least every 12 months.

Most of it though is in 90-day and 180-day bills which suggests near $60 billion in short-term debt has to be recycled every month.

Guesstimating further - and there will be much guesstimating in this piece as the official data does not provide sufficient detail - half the funding for short-term instruments derives from domestic sources and the other half from foreign sources. That would make $30 billion apiece for June, and so on.

One source reckons since September, some 70% was local and 30% was being sourced internationally. This was thanks to the RBA injecting $6.9 billion in September. The currency promptly plummeted.

The June quarter national accounts show $15 billion leaked out of the short-term market in the three-month period whether hailing from local funds or international remittances it is hard to tell but it is reasonable to assume that maybe 70% was due to international funds being repatriated.

It was pretty tough after all and funds throughout the world were cashing up.

RBA to the rescue

Were you to extrapolate from these figures you could come to the conclusion that the flight of funds from the short-term markets could be in the order of $35 billion. By Christmas therefore this market could have contracted by more than 10% or more, expunging another $60 billion in liquidity.

Hence the RBA hopping to the rescue with its $50 billion injection - more than enough to carry the market in the short term and shape the illusion of stability - albeit before the currency toppled.

All this throws up more questions than answers. Where will the banks get the cash they need to settle existing debt which are not being rolled over if they can't redeem their liquidity from offshore (some of it may be declared impaired perhaps)?

Liquidity ratios went pear-shaped in the past two months and APRA has some headaches.

The notes to the June 2008 National Accounts show some ``adjustments'' need to be made to certain ``assets''. It is not clear in which currency those international $A holdings are being held but one would expect it to be split between local domestic currencies and $US quite possibly in our own $A too and this is perhaps why APRA reports both $A value and $US equivalents to the ABS.

The $A has been shellacked since June but even if local players have taken a beating or made a killing they may still not be able to access the funds.

And this is where it gets tricky. Will the banks now have to revert to trying to get more cash from their RBA liquidity ratio holdings? Or somehow exploit their domestic deposit bases further to fill cover the shortfall?

We had better hope for dear life the money is there to fund loan growth. At least it seems Kevin Rudd's peremptory guarantee on deposits has bulked up the banks' deposit bases - was he anticipating a crisis from foreign debt shortfalls? - and the guarantees have delivered them a buffer at the expense of mortgage funds and the like.

All this would also go to explain why the banks have began to lobby the Government for tax breaks on deposits again (see BusinessDay story from Friday).

The numbers would suggest that there is roughly $130 billion now available on deposit. On our guesstimates, that would not be enough to cover the foreign debt obligations as well as finance loan growth at historical levels.

The rub would come when any substantial further flight of capital occurred, hence the trepidation over the $A.

And the disaster scenario would be the banks being unable to repay, or roll over the funding requirements without incurring substantial costs. Such would send Australian debt markets into a tailspin.
Posted by kevin at 11/14/2008 10:48:00 am