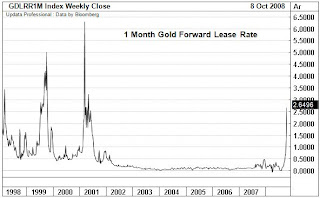 Today’s commentary concerns the last carry trade left in the markets, i.e. gold. Gold peaked at $1032 in March this year; however, since then it has fallen steadily, trading as low as $734. While this fall has been in line with a rising USD dollar, it has also been orchestrated.

Gold has been falling in an environment of rising inflation and rising uncertainty, and I've spoken in the past about gold de-coupling from the USD correlation one day.

At this point in time we need to distinguish between different types of gold, i.e. physical gold and paper gold.

Central banks hold a lot of physical gold and it just sits there earning nothing. As we know, central banks have been pumping money into the markets for 13 months now; what has not been reported is that they have also made their holdings of gold available for lease for about 0.25% for a month.

A short seller in gold can sell spot and lease the gold from the central banks at a nominal interest rate of 0.25%. If you sell gold, you receive USD; the cost of borrowing USD is therefore 0.25% (the gold lease rate) - so as long as gold doesn’t go up it is a cheap source of funding.

The central banks don’t mind this, especially when they want the USD up and as a rule they always want gold to fall. A falling gold price is a sign that everything is ok.

However, as you can imagine this is a time bomb because they are leasing physical gold to a paper gold market. At some point in time paper gold will not trade the same way as physical gold.

The demand for physical gold is the highest it has been for years, and this is the problem. Without the paper gold carry trade, you could argue that gold would be a few thousand dollars higher right now.

All is not well in the paper gold market. And this is a sign of an impending big rally in gold.

Lease rates have been skyrocketing over the past month. For the past six years, the 1 Month Gold Forward Lease Rate has chopped about at levels below 0.25 percent. Higher volatility over the past year has seen the rate move as high as 0.5 percent, but only in recent weeks have we seen rates greater than 2.5 percent (see chart below).

On a global scale, the gold market is unregulated and opaque. No one really knows the size of the worldwide short position in gold, but it exists and it is large (at least 10,000 tonnes). Unlike financial markets, there are few rules and regulations on selling gold short. For years, a dark pool of short sales is believed to have been suppressing the natural ascent of gold prices.

The current spike in gold lease rates indicates that demand for physical gold is extremely high and growing quickly. We may well be witnessing the first seeds of the gold price breaking free from the short sellers and the end (death) of the gold carry trade, which so many bullion banks made such large profits on in the 1990's.

The lease rates (available on TheBullionDesk.com) will be the key indicator to watch. If the short sellers in the gold market cannot afford to roll over their positions, they will be forced to close out their trades by buying gold. This could be one potential catalyst (there are many others) that sparks a major gold rally in the months ahead
Posted by kevin at 10/13/2008 09:13:00 am