Another Swiss giant on the edge ~ Glencore

The hard ball players Xtrata and idiots at UBS and the old complacent criminals, the Zug boys that took care of Alan Bond look like all being punished for their hubris by the gods. The secrecy laws and the status made them feel bulletproof enough but in the light of the infinities of arbitrage and leverage opportunities of the last twenty years all remaining caution would have been discredited by the outflanking of the prudent by the reckless. 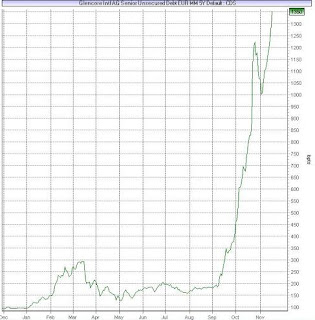 In case you have never heard of this company, then now is the critical time. Glencore is the largest enterprise by turnover in Switzerland, recording record sales of 142.3 billion USD in 2007. According to its own data, Glencore directly or indirectly employs 52,000 employees. And obviously some of it has gone pear-shaped.

From Wikipedia:
Glencore International AG (management buy out of Marc Rich & Co AG) is one of the world's largest suppliers of commodities and raw materials, and is also among the world's largest privately held companies. As of 2006, it was Europe's sixth-largest company in terms of turnover.[1] According to The Sunday Times,[2] the company had USD 10.9 billion in shareholders' equity at the end of 2006 and is completely owned by its management.


According to an Australian Public Radio report, "Glencore's history reads like a spy novel".[3] The company was founded as Marc Rich & Co. AG in 1974 by billionaire commodity trader Marc Rich, who was charged with tax evasion and illegal business dealings with Iran in the U.S., but pardoned by President Bill Clinton in 2001. In 1993 and 1994, Rich sold all of his majority share in Marc Rich & Co. AG back to the company.[4] The enterprise, renamed Glencore, is now owned and run by his former associates, including former Glencore CEO Willy Strothotte and present CEO Ivan Glasenberg. In 2005, proceeds from an oil sale to Glencore were seized as fraudulent, in an investigation into corruption in the Republic of Congo[5].
Posted by kevin at 12/14/2008 02:00:00 pm

Glencore will be fine.

Seriously, there's a slight bent of sensationalism in your coverage here. The "old complacent criminals" that you refer to manage the largest commodity trading operation in the world and have been doing so extremely profitably for decades and decades. Let's not make any heady assumptions like they're "hubris" is going to all of the sudden cause a collapse of one of the best run businesses in the world.

That's an interesting perspective, anonymous. You might well be right, Glencore is private and Swiss based and up to last year the secrecy and reputation for probity of the Swiss environment worked in its favour, after the failure of UBS and the exposure of the extent of leverage in the Swiss banking system, both location and apparent opacity now work in reverse.
as for the Zug old boys, a business model aparently based on the facilitation of international tax fraud can hardly be expected to win respect in the light of the events of the last year and I did not say that Glencore executives were "criminals", merely that at least one Zug based banker facilitated the looting of Australian public companies.
I'm merely pondering why the market should be making such adverse judgements regarding Glencore debt.

Finally, I am perfectly entitled to ponder the repercussions of the commodity slowdown on a commodity based company and if ever there were days when individual bloggers could be forgiven for hyperbole in regard to the antics of a class that were so ruthless in pursuit of there own interests and so complacent otherwise, its now.

For the record, this is all a sociological observation and inference, not an explicit opinion on the vaibility of Glencore, which is probably in the "two big not to be bailed out" class anyway.

Your assertion that Glencore is one of the best run businesses in the world is an equally unsupported assertion and your tone suggests that you have some connection or interest in the company, in which case, your disputing minor blog sphere gossip based on the price of credit default insurance on its unsecured debt can only be taken as evidence of either insecurity or paranoia.

If you want to make a case for Glencore, feel free. Put the CDS into perspective, speak of the companies virtues and prospects, but identify your interest first.

Glencore update: I guess thats what having access to credit is all about, you can stiff the bondholders and reduce your leverage. Not withour risks...imo.

"For businesses brave enough to raid their warchests, and to risk straining relations with their banks, there are some real bargains to be had in bond buybacks. But the banks do have a point. Bank facilities should generally be a temporary measure or a last resort. Companies that use them opportunistically today might find they have no lifejacket if economic conditions worsen further."