China and India back to the future

From a long-term perspective, the prospect of China becoming the world’s largest economy, and India the third largest, within the next 10-15 years, represents a return to the order which has prevailed throughout most of human history. According to calculations by Angus Maddison5, from at least the beginning of the common era until the early 19th century, China and India accounted for around half of global GDP (see Chart 1). For much of this period China and India were intact polities, had the world’s largest populations and were technological leaders. 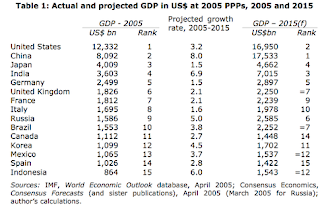 As Jared Diamond notes, “until around AD 1450, China was technologically much more innovative and advanced than Europe”6. Chinese inventions before or during this period included the wheelbarrow, gunpowder, matches, cast iron, porcelain, magnetic compasses, sternpost rudders, paper, printing, paper money and a meritocratic civil service.7 Indian inventions from this period include the decimal system (and the concept of zero), the water-wheel, cotton-ginning, cloth dyes, brass and the extraction of crystalline sugar from cane8. The decline in the relative importance of China and India between the early 18th and late 20th centuries resulted from, inter alia, the industrial revolution in Western Europe; the formation and rapid expansion of the United States; China’s retreat from engagement with the global economy beginning during the Ming Dynasty and subsequent decay under the Qing dynasty; the impact of colonial rule on India, and ‘gunboat diplomacy’ and ‘unequal treaties’ on China; nearly fifty years of warfare and social disorder in China in the first half of the 20th century followed by another quarter-century of chaos and misrule under Mao Zedong; and forty years of growth-stultifying Nehruvian socialism in India from independence until the financial crisis of 1991.


A good pdf read. The charts show clearly, the world order is shifting back to Asia. Asian farmers and inventors in China in particular, were incredible in the past. Many inventions like printing of books, books with pages, numbers, algebra, paper money, fire power, integrated farming methods, unitary organization of villages, cities and the government, intensive farming techniques, fertilization, silk weaving, high-fired pottery, astronomy, etc: this is from the great civilizations of the East.
Posted by kevin at 5/16/2008 07:19:00 am