The (much quieter) bank panic 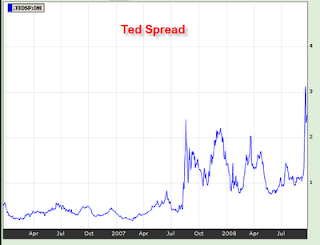 Need for action on the banking panic

Banks are not to be trusted. This is not just the view of the public and policymakers, but that of the banks themselves. Spreads on unsecured inter-bank lending have reached unprecedented levels, particularly in dollars and, to a lesser degree, sterling. Such stresses cannot continue for long, without serious damage to both the financial system and the economy. Something has to be done. The question is: what?

Thursday’s spread over one month between the London interbank offered rate and future expected policy rates was close to 200 basis points for dollar loans and 120 basis points for sterling ones. In the case of dollar loans, the spread was nearly twice as high as at any point since the crisis began in August 2007. Market stress has evidently reached frightening levels.

If lenders demand huge spreads for such short periods, they are either tightly constrained in their ability to lend, deeply concerned about the solvency of counterparties, or engaged in predatory behaviour. Whichever of these possibilities is true, credit to the economy will dry up. If banks do not trust banks, what do they trust? The answer is: only the government.

This dire situation makes decisive action essential. Beyond doubt, failure by the US Congress to pass a rescue package would court catastrophe. But the plan proposed by Hank Paulson, US treasury secretary, is inadequate. This, too, is the banks’ view. They know his plan is likely to pass, in some form, yet seem increasingly nervous.

So what is to be done? The response must have three elements.

First, in the absence of private funding, central banks must do the intermediation among banks. Moreover, banks cannot fund ongoing operations overnight. So all central banks must shift liquidity provision away from overnight lending, towards much longer maturities.

Second, the US Congress must pass a version of the Paulson plan. This must promise to make the distressed securitised mortgage assets now on the books of the banks more liquid. While the initial plan needed improvement, a better version must be enacted extremely soon.

Finally, not only the US, but also other countries, and particularly the UK, need to put in place a credible plan for the forced recapitalisation, or closure, of weakened banks. Banks unable to borrow are zombies. They must be restored to health or allowed to perish quietly.

Some of these actions are going to be highly unpopular with powerful interests, including the banks themselves. So be it. With the banking system in dire distress, effective action is needed right now.
Posted by kevin at 9/28/2008 10:11:00 am

Email ThisBlogThis!Share to TwitterShare to FacebookShare to Pinterest
Labels: banks